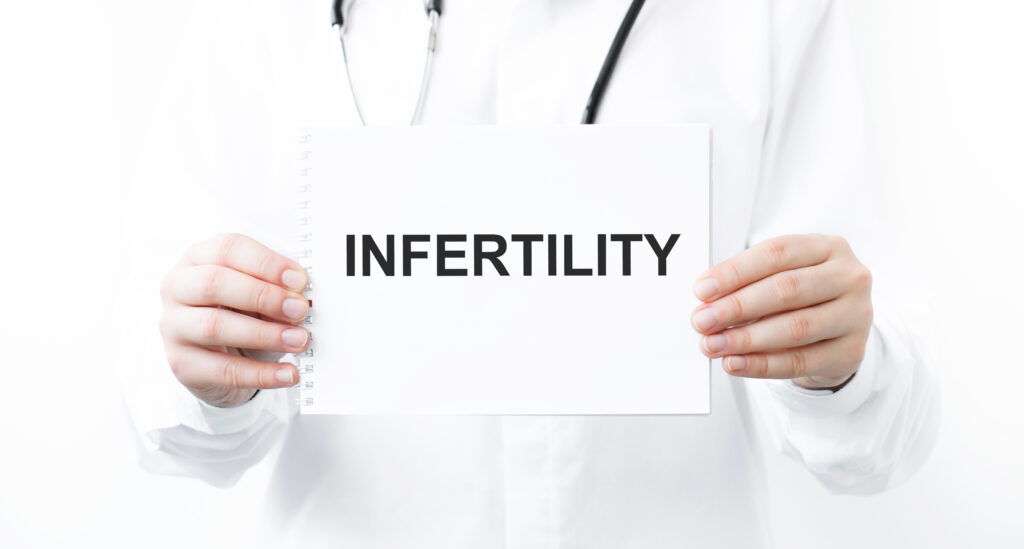 Being told you have male infertility can strike a man hard. Many men struggle with the range of feelings that wash over them when told they’re the reason they struggle to conceive. But it’s more common than you might think.

For example, nearly 1 in 7 couples struggle with conceiving, and male fertility plays a role in between a third to a half of all cases.

What Is Male Infertility?

Someone is considered ‘infertile’ when they cannot conceive a child despite frequent unprotected sex for more than a year. But seeing as how conceiving a baby is such a complex process, it’s unsurprising that many couples experience difficulties.

For a man to avoid infertility complications, his reproductive system must jump through many hoops.

At least one testicle must function correctly with the right amount of testosterone produced to create healthy sperm.

There are many areas in which complications can arise to cause infertility.

The main reasons for male infertility often boil down to low sperm production, abnormal sperm function, or the delivery system of sperm being blocked.

However, a man has a higher risk of infertility if his prostate or genitals have been infected or inflamed. Or if he has injured his testicles, he entered puberty particularly early or late, or he is recovering from a hernia or is taking certain medications for a range of conditions, such as ulcers, psoriasis, depression, and high blood pressure.

In many cases, male fertility is caused by problems in making healthy sperm. ‘Unhealthy’ sperm could have issues with not being fully grown, being oddly shaped, not moving in the right way, being made in low numbers (known as oligospermia), or not even being made at all (known as azoospermia). While azoospermia sounds like the worst-case scenario, 40% of those diagnosed have an easily reversible blockage in their tubes.

Regardless of the problem that leads to infertility, the three main causes are medical, environmental, and lifestyle.

There is a wide array of possible medical causes that can lead to the diagnosis of male infertility. Here are just a few of the more common ones.

Varicocele is the swelling or enlargement of the veins in the scrotum that transport oxygen-depleted blood from the testicles. Instead of circulating out of the scrotum, a varicocele means that blood instead pools in the veins. Unfortunately, these aren’t uncommon and are found in 16% of all men, though they often don’t cause complications.

However, varicoceles can be found in 40% of men with male infertility, which is a common cause. This is likely because it creates an abnormal blood flow that might reduce sperm quantity and quality.
The good news is that varicoceles are treatable and are the most common reversible cause of male infertility.

Infections can interfere with many parts of the male reproductive system, such as sperm production, sperm passage, or even sperm health. For example, many men contract epididymitis or orchitis (referring to the inflammation of the epididymis and testicles, respectively) and STIs, like gonorrhea or HIV, all of which can interrupt the healthy production of sperm.

In some cases, infections such as these can result in more permanent testicular damage. While this sounds particularly worrying, in many cases, it’s still possible to retrieve some sperm anyway.

Immunologic infertility occurs when your body produces antibodies that attack sperm. Although immune system cells are designed to attack harmful invaders, this condition results in antibodies instead of mistaking sperm as a threat and so attack them.

Whether cancerous or non-malignant, tumors can sometimes be found to be why a man has infertility issues.

When developing as a fetus, it’s normal for a man’s testicles to descend from inside their abdomen to form inside the scrotum. However, when one or both of these testicles do not descend, these are referred to as ‘undescended.’ Since the inside of the human body is too warm for testicles to produce sperm, this condition tends to result in decreased fertility.

There are many glands in your body responsible for maintaining your body’s delicate cocktail of hormones; the hypothalamus, pituitary, thyroid, and adrenal glands are all responsible. However, if a man develops male hypogonadism, a condition with various underlying causes, this results in low testosterone that can impact sperm production.

Sperm and semen both travel through a series of tubes before being ejaculated at the point of orgasm. However, due to injury, infections, or abnormal development, obstructions can occur in these tubes. These blockages can occur in the testicles, the tubes themselves, the epididymis, the vas deferens, or even the urethra.

One of the key prerequisites to conceive a child is sex. However, if a man has any condition that makes this challenging or not possible, this contributes to male infertility. For example, this can refer to erectile dysfunction, premature ejaculation, or anatomical abnormalities, such as the urethra opening beneath the penis, hypospadias.

Those with celiac disease have a sensitivity and intolerance to gluten, a protein found in food with wheat. Though it may sound strange, this can occasionally contribute to male infertility.

Before assuming there’s something wrong with your body, consider if you’re on any prescription medications. There are numerous that can reduce the production of sperm or affect fertility. Examples include testosterone replacement therapy, anabolic steroids, cancer medications, ulcer drugs, and arthritis drugs.

Naturally, surgeries such as vasectomies or those done on your scrotum, testicle, or prostate can all interrupt the normal function of sperm production.

When overexposed to some elements, you can experience a reduction in sperm production and function. Due to this, you should do your best to avoid the following environmental causes of infertility.

Heavy metals, such as lead

Overheating testicles: High temperatures can impair sperm production and function. As a result, you should avoid excessive use of saunas and hot tubs, as well as sitting for long periods, wearing tight clothes, and using a computer on your lap.

Illicit drugs such as cocaine and marijuana damage your fertility and reduce sperm count and quality.

However, there are still legal drugs, such as anabolic steroids used for muscle growth, that also shrink your testicles and reduce sperm count.

Alcohol in any dose can have various damaging effects on your sexual health. Alcohol can lower testosterone levels, cause erectile dysfunction, and decrease sperm production. Liver disease from excessive alcohol consumption can also lead to problems with fertility.

As well as the more obvious damage to your lungs, smoking tobacco has various secondary effects, such as significantly lowering sperm count. Even second-hand smoke can affect this too.

Being overweight as a result of both a poor diet and lack of exercise can not only impact the production of sperm itself but can also cause hormonal changes that reduce male fertility.

When looking out for male infertility, the most obvious symptom is the inability to conceive a child. However, having a little difficulty over a few months doesn’t mean you should immediately assume that you’re infertile; instead, you must try to conceive regularly for at least a year with no success.

In many cases, there are no other, particularly obvious symptoms, but there is a range of potential symptoms that some men have reported that could signal male infertility. These can include:
Problems with sexual function (such as difficulty ejaculating, small volumes of ejaculate, a reduced libido, and erectile dysfunction)

Pain, swelling, or lump in the testicles

The inability to smell

Decreased facial and body hair, combined with other signs of hormonal abnormality

If you suspect you may have male infertility and want to start a family, it’s important to see a doctor. You should ensure you visit a doctor if you’re unable to conceive despite trying for over a year, you’re experiencing problems with your erection or ejaculations, you have a lower libido, or you have pain, discomfort, or a lump in your testicles.

When consulting a doctor about infertility, they will test you and your partner to determine the cause of infertility and decide on the appropriate treatment. These tests will include reviewing your health history and a physical exam.

Your health history will explore any childhood illnesses, current health problems, and medications that might impact sperm production. The physical exam will look for physical problems with your penis, testicles, epididymis, and vas deferens.

After the physical exam, the diagnosis can include other tests. For example, semen analysis involves taking two semen samples on different days to check how much semen and sperm you produce, acidity and sperm shape, and movement.

Doctors may also want to conduct blood tests to check your hormonal profile to ensure hormone levels are a contributing factor. For example, follicle-stimulating hormone (FSH) communicates to the testicles that they should be producing sperm. A particularly high level of this means an obstruction in the communication between the pituitary gland and the testicles.

Other tests may also be conducted to discover the cause of any potential sperm defects. For example, doctors might suggest an ultrasound, a procedure in which sound waves bounce off the organ to generate a more detailed picture of the inside. This can help look at the health of your testicles, blood vessels, and overall structure within the scrotum. For example, you may even experience a transrectal ultrasound in which a probe is placed inside the rectum to investigate your ejaculatory ducts to see if there is a blockage or issue with their formation.

If doctors see that you’ve created with very little or no sperm, they may conduct a testicular biopsy. This requires a small incision in the scrotum or a needle to pierce through numbed scrotal skin. This procedure aims to remove a small piece of tissue from each testicle to analyze further and in more detail.

Receiving the diagnosis and discovering that you have male fertility can be a stressful and frustrating experience – however, hope is not lost because a range of treatments does exist. However, there’s no one general fix for all issues since treatments depend on the cause of fertility. For example, tumors require surgery, radiation, or chemotherapy; celiac disease requires a gluten-free diet; hormone disorders require hormone treatment drugs; and lifestyle problems require you to stop smoking, using drugs, drinking alcohol, and instead exercise, eat more healthily and reduce stress.

There may even be various treatments for the same problem. For example, if dry ejaculation is causing infertility, a doctor might start by prescribing drugs before moving on to other options to stimulate ejaculation. Penile vibratory stimulation vibrates the tip of your penis to encourage a natural climax, but rectal probe electroejaculation is more effective, retrieving sperm in 9 out 10 cases. Alternatively, doctors can even retrieve sperm with a needle in a process known as testicular sperm aspiration.

If treatments to cure you of infertility are not working, you still have hope. There are various methods by which healthcare professionals can assist you and your partner in getting pregnant. One method is artificial insemination, in which a healthy sperm is placed into the uterus to make it easier to make it to the egg in the fallopian tubes.

Other methods on offer are ones like in-vitro fertilization (IVF) and gamete intra-fallopian transfer (GIFT). A similar process to artificial insemination involves high-quality sperm being collected and mixed with eggs before being placed within the fallopian tubes to make conception easier. Alternatively, there is even intracytoplasmic sperm injection (ICSI), in which a single sperm is injected into an egg with the fertilization taking place under a microscope before being placed into the uterus.

Most men want to be fertile, and the prospect of being branded infertile is a scary one. Buy despite the unnecessary stigma; there’s no need to worry. But, no matter the cause, there are very often a wealth of possible treatments that can still allow you to start a family and live a happy, normal life.